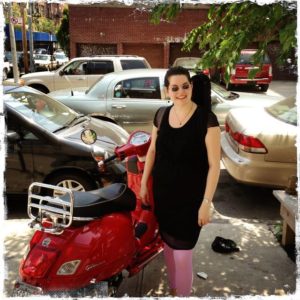 How did you come to join QUO?

A couple of years ago, I played in a piece for QUOtets written by my friend Seth Bedford, whose cabaret ensemble I had played with for many years. I was so impressed by the friendliness and creativity at QUO that it stayed with me ever since, and I decided to join this season!

How long have you been playing your instrument(s)?

I started playing violin in first grade when they sent us home from school with a flyer asking if anyone wanted to play a string instrument. It’s incredible how making a decision when you’re six can influence the rest of your life! I played very actively through high school and then not enough in college, so in my adult life I have tried – and been lucky – to be a part of some great groups that keep me busy, including the chamber pop band I’m in, Mappa Mundi.

What musical symbol best describes you and why?

I’d have to say a breath mark. I can often seem to be a very quiet person and I’d like to think that quietness, or a pause, still adds something meaningful to the whole.

What is your favorite place to take friends visiting NYC?

My husband is a licensed NYC tour guide and there is nothing better than spending a day in any unfamiliar corner of the five boroughs, encountering new and unbelievable things. But if my friends aren’t ready for a full-on immersive day, let’s get bagels and sit on the street and people-watch.

(From Kyle Payton) If your instrument had a name, what would it be and why?

I’ve never thought of a name for it, but the name that’s always closest to me when I play it is my great-uncle Dave, who played it into his 90s until he passed it on to me.