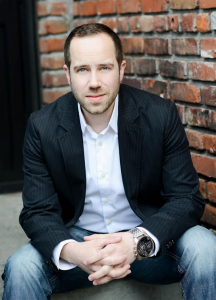 Sam Nedel is our principal bassist and one of our featured composers. He joined us in April 2010.

How did you come to join QUO?
I attended a QUO concert mid-season of their first year. They had no bass players and I missed playing in an orchestra. It was a match! I joined the next rehearsal.

What is your favorite place to take friends visiting NYC?
I have two: Sunset Park for the amazing view of Manhattan, Liberty Island and Staten Island. Also, since most visitors want to go to Times Square, I take them to a little-known art installation in the center of it. Standing across the way from the TKTS steps is a giant speaker beneath a grate which constantly plays a sort of hum/tone. When standing on the grate, the usual cacophony seems to be canceled out, making the space feel almost tranquil.

How long have you been playing bass?
I actually started on viola (at age 9) but at some point during that first year in my school’s string program, I saw someone from another school with a bass. I really wanted to try my hand at one and switched the next year. I’ve now been playing the bass for 24 years.

Question from Lisa: Who is your favorite composer and why?
There are many composers whom I greatly admire and I could never settle on one favorite. That said, my current short list (in no particular order) is Ryuichi Sakamoto, John Luther Adams, and Lowell Liebermann. I will begin studying composition with Maestro Liebermann in the fall so I’ve been listening to his work quite a bit in preparation for that. If you’re not familiar with his music, there’s a large variety to chose from– but his works that feature piano are really fantastic. I discovered John Luther Adams through the “Meet The Composer” podcast. Many of his works are breathtaking depictions of the natural world (I highly recommend his latest, “Become Ocean”). Sakamoto has scored many films, including “Merry Christmas, Mr. Lawrence”, in which he also starred opposite David Bowie (another composer I’m rather fond of). He has contributed extensively to popular music, minimalism, contemporary classical, and electronic music— all of which he does very, very well.