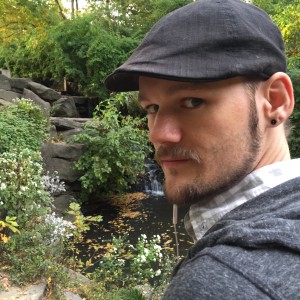 How did you come to join QUO?
I joined QUO in the second half of the “Voyages” season after responding to an ad for low strings with the intention of playing viola. I ended up in the second violins instead and then subsequently moved to the firsts. To my surprise, I ended up meeting a fellow violinist from my hometown and we actually attended high school together.

What is your favorite place to take friends visiting NYC?

Since I’m a total librophile, I either take them to The Strand or Mercer Street Books. The latter is open until midnight on Fridays and Saturdays, so it’s great to grab a drink with some friends and go book shopping!

What musical symbol best defines you and why?

I’d have to say any of Bach’s ornaments would describe me perfectly. Mordents, trills, pralls, idems… all of them; because I’m always adding that extra something to everything I do to stand out.

How long have you been playing your instrument?

I’ve been playing music since middle school; I started on the trumpet. Then when I got to high school, my friends would give me random instruments to see how fast I could learn how to play them. I taught myself flute, piccolo, french horn, clarinets, saxophones, euphonium, cello, and pretty much everything in between. I started playing the violin about ten years ago when my grandma gave me a violin that’s been in my family for a couple generations. I’m fascinated with the violin… so I taught myself how to play it.

Question from Jason: Who is your favorite composer and why?
I don’t think I could ever pick just one composer. At best, I could pick one from each period, but that would still be a challenge. Baroque would have to be a tie between Vivaldi and Rameau. I love Vivaldi’s breadth of work and seeing (hearing) his style develop throughout his myriad of works and Rameau has several operas that are fantastic. The Classical period, I’d have to say Mozart because of his sense of humor and his symphonies. Now for the Romantic period…where to begin?! Beethoven of course, Mendelssohn, Tchaikovsky and Stravinsky are up there… Saint-Säens and Wagner (after all, I did play horn for a while); I don’t think I could pick just one! Neo-classical and Modern would have to be Copland and Eric Whitacre. Copland’s music is like the soundtrack of America and Whitacre works magic with cluster chords.