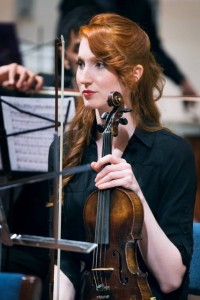 How did you come to join QUO?
I moved to the city to attend the American Musical and Dramatic Academy as a musical theatre major. I’m still not sure why, but I brought my violin with me. I had already been in the city for three and a half years and I was staring at my violin case one night and thought to myself, “I have to do something with this.” Less than a week later, a side banner ad popped up on my Facebook that said, “Come play with us.” It was totally a sign. That was in 2010!

What is your favorite place to take friends visiting NYC?
The Highline is fun because it’s right by my apartment. I love the Sheep Meadow in Central Park, outdoor dining and taking people to see a Broadway show through a sneaky shortcut so we don’t have to walk through Times Square. In the summer, the Monday night movies in Bryant Park are my most favorite thing.

What musical symbol best defines you and why?
Accelerando. I live a fast paced life. I’m always finishing auditions or work and running uptown to do something fun, like a 2 hour dance class. Whenever I have a day off I don’t know how to relax. Even on the beach, I’m the freak that won’t stop playing in the waves.

How long have you been playing your instrument?
I started playing violin in 4th grade when I was nine. Each student had a quick meeting with the band or orchestra director to place them with an instrument. I told them that I wanted to learn guitar because I wanted to be in a band. The band director didn’t quite know what to say. He told me they don’t teach guitar and suggested that I play violin. He wiggled his fingers on his left hand and told me that the instruments were similar. I think he lied.

Question from Ian: If you could take a violin lesson with any one person who would it be and why?
I would take a lesson from Lindsay Deutsch who was the soloist in our March concert last year. She gave me goosebumps.