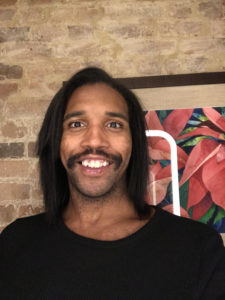 How did you come to join QUO?
I joined QUO in 2010 after a couple of years of searching online for a LGBT orchestra in the NYC area. Growing up in NC there were no such groups, and I always dreamed of being a part of something so special. I sent them an email request to join, thus beginning my journey with them. I started as a second violinist until Phong recruited me over to the dark side of the first violins, lol! I performed in as many concerts, collaborations, etc as I possibly could. Eventually I became the group’s librarian which was an awesome learning experience. Shortly before my hiatus from QUO in 2014, they even awarded me the Artist Director’s Service Award which I still display proudly in my home! A note to anyone thinking of joining…DO IT!
How long have you been playing your instrument(s)?
I’ve had an interest in the arts from a very early age as a way to express myself. I gravitated to drawing and painting first, then theatre shortly after. When I moved to North Carolina in 1996 and enrolled in school I was placed into orchestra as my elective, as there were no other options. I began with cello for about three years before switching to violin shortly after, and I have been playing off and on ever since. I immediately fell in love with this new form of expression and I’m thankful every day for my “accidental” introduction to it.
What musical symbol/term best describes you and why?
Hmm, never thought about this before to be honest. I think Con Brio (with spirit) best describes my personality. Fun, care- free, smiles, and usually tons of laughter. Plus I can be super silly, friends in and out of QUO would probably agree.
What is your favorite place to take friends visiting NYC?
Honestly I love taking my friends on a walking tour of the various neighborhoods in NYC, because that is how I discovered and fell in love with it when I moved back here! I’ve been known to stroll from one end to the other, finding new places and landmarks along the way.
From Aaron Patterson:
If you could meet any composer in history who would it be and what would you ask them?
This is an easy one, hands down I would love to meet Johann Sebastian Bach and I would love to ask him to confirm if in fact the Chaconne was written as a tribute to his late wife.