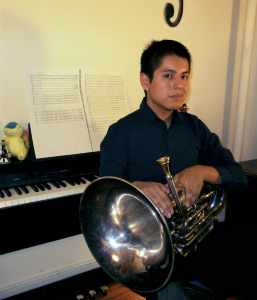 Joe plays euphonium and trombone, and joined QUO in May 2016.

How did you come to join QUO?
After being a member of the LGBAC, I heard some people mention QUO from time to time. I’m always looking for new opportunities to play, and getting to play orchestral repertoire is an absolute dream for me. As a euphonium player, the orchestra world is usually pretty closed off to me, so I didn’t think that I’d be able to join. But when I heard that QUO was doing The Planets, which has a euphonium part, I was super eager to join! I’ve loved being part of the group from my first rehearsal, so I was happy to dust off my trombone skills so that I could return for the next concert!

What is your favorite place to take friends visiting NYC?
My mainstays are usually restaurants: Totto Ramen, PJ Clarke’s, or anything down by the St. Marks area. I like food.

What musical symbol best defines you and why?
Bass clef. I even have a hat with one on it. As a low brass player, there’s nothing more exciting for me than hearing a large double/triple-forte low brass section. The power that our instruments can carry in that low register is amazing. Also, since euphonium players usually read both clefs, my clef of choice is bass because then there’s no tricky transposition involved.

How long have you been playing your instrument?
For a long time, the euphonium was not my main instrument. I actually started with the piano when I was 7 years old, and I continued to study it all the way through college. I added the trumpet when I was in 5th grade, when I joined band. I stuck with those two instruments until 10th grade, when I was switched to the euphonium by my band director. I auditioned and was admitted to the music education program at Ithaca College as a piano student, but luckily I was able to also enroll in their crossover program, which allowed me to continue to study the euphonium and join the tuba/euphonium studio too. I’ll admit that I never thought of myself as a serious euphonium player for most of my time there; I was just happy that I got to still play it and be in band. But halfway through college we got a new teacher, Dr. Aaron Tindall. It was through his combination of high standards and very direct specific instruction that I was able to really grow and truly believe that I could be a serious player of the euphonium. Today, I’m happy to say that the euphonium is my main instrument, the band/orchestra world is much more fun for me than piano world ever was, and I feel totally at home playing and expressing myself through it. Trombone, being a close relative to it, is fun to play as well!

Question from Clint: What composer, in your opinion, wrote best for the trombone?
Wagner, Mahler, Strauss, and Brahms come to mind first. You can’t go wrong with the German romantics for low brass parts. However, I really love the trombone parts that Berlioz wrote for Symphonie Fantastique. Those parts have a good combination of melody and brass power.