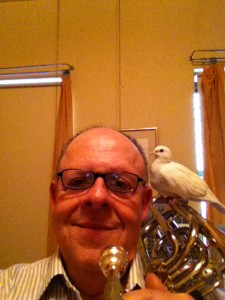 How did you come to join QUO?
Several years ago I was asked to sub by Jim Babcock for one concert and ended up being called for just about all of them.

What is your favorite place to take friends visiting NYC?
I like the High Line, the various art museums, an off-Broadway play, Central Park and the Bronx Zoo and Botanical Gardens.

What musical symbol best defines you and why?
I am tempted as a trombonist to say “very long rests” but probably “ff.” I am kind of excitable and tend to be a bit loud at times.

How long have you been playing trombone?
My first trombone came to me in junior high school as my dream-come-true instrument and I continued to play it through college. I then stopped for about 35 years and during that time did a great deal of composing. I picked it up again about 5 years ago at the suggestion of a musician friend and became enamored of the bass trombone in particular. I just have a ball playing it.

Question from Laura: What has been your favorite piece you’ve played with QUO and why?
That is a tough question, since we play so many good pieces, but I would have to say so far it has been Copland’s 3rd Symphony. Besides being a great masterpiece of American music, it has wonderful parts for the trombones that are really hard but satisfying to play.