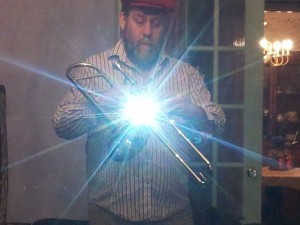 Jim is low brass section leader and a founding board member and past president of QUO.

How did you come to join QUO?
Prior to that famous meeting at Starbucks, I had been contacted by Brandyn Metzko, a Cleveland-based musician who was moving to New York and looking for help to start up an LGBTQ community music ensemble. We were networked through the Lesbian and Gay Band Association. NYC already had a vibrant gay community concert/marching band, so he decided to put his efforts into creating an orchestra. Although metro NYC already had more than a score of community orchestras, none were specifically aimed at the LGBTQ community. The day after the founding meeting, Brandyn and I were Skype-chatting and came up with QUO’s name. I also designed the orchestra’s logo.

What musical symbol best defines you and why?
The glissando. That seamless glide from one note to another, which on the trombone can be a forceful dramatic effect, a comical comment, or a jazzy ‘rip.’ It’s versatile, just like me.

How long have you been playing trombone?
My affair with the trombone began in the summer of ’84, when my band teacher suggested I take lessons because our concert band would be without any come September. I was already doubling on horn and trumpet, so this seemed like a natural progression.

Question from Drew: What is one piece that you’d absolutely love to play in QUO?
There is a charming piece by Gustav Holst, Walt Whitman Overture, op.7, that I think would be perfect for QUO. Holst wrote this as a tribute to Whitman, having been inspired by his writings and ideas on beauty.