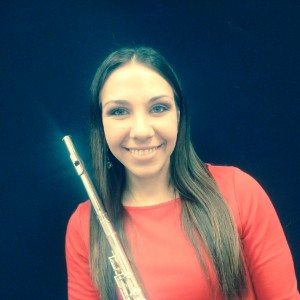 Jenn plays flute and joined QUO in April 2013 (for Firebird)

How did you come to join QUO?
I was first asked to play in a QUOtets performance as part of a saxophone quartet with Matthew Hadley, Ben Solis, Brian Shaw, and myself (on baritone sax) performing the tango Por Una Cabeza by Carlos Gardel, featured in the film Scent of a Woman. I first played with QUO as an orchestral member when they were doing their first production of Stravinsky’s Firebird in 2013 in collaboration with DanSpace, Katy Pyle, and the Ballez Company (and then again for their second production). The production consisted of several performances and it was a great experience. After that, I was asked to sub within the section and was asked to be a full member as of 2016. It’s been a great experience and I look forward to more performances with this great group!

What is your favorite place to take friends visiting NYC?
I don’t really have one particular place to take friends when they visit the city but we’ll typically attend museums or a performance with the Philharmonic. I guess you can say I’m “old school.” I grew up in the city and would always go to museums and such when I was a kid. In many ways, it brings me back to earlier days and memories of my family.

What musical symbol best defines you and why?
For my musical symbol, I’m torn between segue and accarezzévole. I relate to segue because I’m always running from one thing to the next as I juggle being a professional musician/coach and teacher as well as an English teacher. However, accarezzévole represents me as well because I am incredibly expressive and caressing, embracing all that I do.

How long have you been playing flute?
When I was ten years old, I was “assigned” the flute. Growing up, my grandmother taught me as much piano as she could. She was a singer on Broadway (one of her roles was that of Kate’s understudy in the original Kiss Me, Kate!) and passed her music genes down to me. When the opportunity to play instruments came up in fifth grade, my mother wanted me to play the saxophone but my teacher told me I was too small (that’s the story of life, after all) and flute was my next choice. Little did my teacher expect, I suppose, that I would go on to play saxophone as a woodwind doubler, bringing me to play Carnegie Hall debuts of new music (one on bari sax, no less) as well as off-Broadway productions. Funny how some things work out…

Question from Andrew: You’ve been playing in LGBT ensembles for as long as I have (possibly longer?). In your opinion as a straight ally, what is the importance of LGBT ensembles like QUO, and what keeps you coming back?
I have been playing in LGBT ensembles for over ten years. I believe that all people should be able to love whomever they want and should be able to have the freedom to express that love without prejudice. More than that, I believe that all people should be able to love themselves, to express themselves, and to not be judged and mistreated because of who they are. We are all different and we should embrace the differences that make us unique individuals. Ensembles like QUO call attention to the urgency and immediacy for greater equality (an equality that was fought for and continues to be fought for) and demonstrates, through the power of music, that love and respect can trump adversity and bring about positive changes in our world. I keep coming back because not only do I get to work with wonderful musicians but for the sense of “family” that you get when you come into the group. I am thankful for the relationships I have developed from being a member in both QUO and The Lesbian & Gay Big Apple Corps.