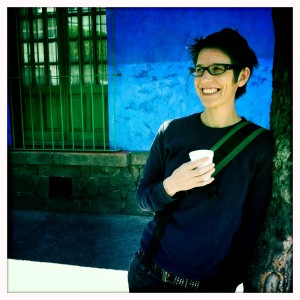 Jasmine plays cello, and joined us in October 2013

How did you come to join QUO?
I saw a Ballez performance of The Firebird and while I loved the dance, I kept thinking, who is this glorious orchestra? I found the QUO website the next day and saw they needed string players. I wrote an email asking if they wanted a ‘moderately experienced, very out of shape cellist’ (or something like that) and got such a friendly invite to the next rehearsal that, despite my nerves, I couldn’t resist. I was a late joiner in the fall of 2013, but to save my pride I practiced more than is cool to admit and played that season’s first concert. I was hooked and have stayed on since.

How long have you been playing the cello?
I have been playing the cello since I was about 15 (so, nearly 25 years!). I studied the piano first, but in my brooding teenage years was introduced to Pablo Casals’ recording of the Bach suites and immediately recognised them as the perfect soundtrack to my most romantic-melancholic version of my life. I convinced my parents to rent me a cello and started lessons (I have no idea where they found the money, which they certainly did not have). The terrible sounds I coaxed out of that sad instrument were made more painful by an instructor I loathed, so I nearly gave up a few months in. I lucked into a second instructor who I clicked with right away — he compared learning to play the cello to learning a sport (and all my other limited life references were to sports), building up the muscles and techniques and plays — and was able to study with him for 5 years or so because he waived his fees (he called it a ‘scholarship’ so it didn’t feel like charity). I went through the Royal Conservatory exams (is that a thing here in the US, or does that give away my Canadian/Commonwealth status?), but mostly gave up formal training in my early 20s and just busked (mostly the Bach suites!) and played in bands anywhere I could after that.

What’s your favorite place to take friends visiting NYC?
I live in Brooklyn just a few blocks from the park, so my favourite place to take visitors is walking through Prospect Park — with the fabulous explosions of bbq-parties in the summer and constant quiet hum in the winter.

What the most unusual thing you’ve seen happen on a NY subway?
Tough, because it seems the unusual becomes usual on the subway, no? (Those fantastic pole-dancing routines, the nail clippers, the crying, the three-course meal eating, the sleeping on strangers’ shoulders, etc.). But once on a really crowded train, the kind where you can’t even get your hand to a pole for balance but you also don’t need to because the crunch of bodies keeps you stable, I was standing directly over top of, basically on, a seated guy who kept barfing into a plastic bag.