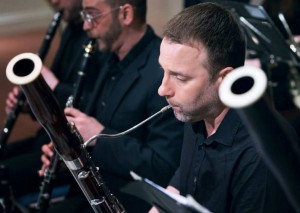 How did you come to join QUO?
I was looking for an amateur orchestra to join after moving to NYC, and QUO seemed like the perfect opportunity. After sending an email inquiring about the possibility of joining QUO, I received an immediate reply that the bassoon section was full. About five months later I got another email inviting me to join in the fall of 2011, and I ended up playing the “grandfather” solo in Peter and the Wolf during my first QUO concert.

What is your favorite place to take friends visiting NYC?
I usually take visitors to Cafe Mingala on the Upper East Side. Although many of my friends have visited New York before, remarkably few are familiar with Burmese cuisine.

What musical symbol best defines you and why?

I identify with the crotchet, because the word sounds both worldly and vulgar, like me.

How long have you been playing the bassoon?
I became obsessed with the movie Amadeus during the summer before my senior year in high school. Over the course of watching it ~40 times, I became enchanted with the sound of the bassoon and loved the way it pokes out of the middle of the orchestra like a big snorkel. However, I had never seen nor heard someone play a bassoon in real life. I grew up on a farm in a town of 350 people. My band director loaned me an instrument owned by the school district for the duration of my senior year. I was 18. I taught myself the fingerings and how to read bass clef while continuing to play principal trumpet in the band. I started taking bassoon lessons during my freshman year in college and kept taking lessons until I graduated. As a biology Ph.D. student I played in nearly every orchestra and opera company that existed on Harvard’s Cambridge campus (at least 7 ensembles that I can recall).

With the possible exception of QUO in 2011, there is rarely a surfeit of bassoonists, so it isn’t very difficult to find performance opportunities. Additionally, bassoonists belong to an unspoken fraternity, so it’s fun to play with them. Whereas trumpet players might greet each other saying “I can play higher than you,” bassoonists feel an immediate bond-—mostly commiseration about reeds and playing such an unwieldy instrument. 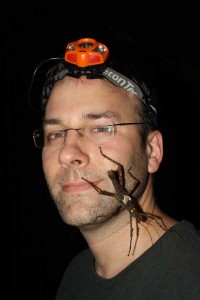 Question from Seth: How has playing the bassoon in an orchestra enhanced your non-musical life?
I think playing the bassoon (and being a musician in general) has taught me at least three things: patience, prioritization, and performance. One learns patience though constant practice and realizing that some things must be learned slowly over time. Many difficult passages cannot be mastered in a single sitting. Prioritization is important because I have limited practice time. Do I focus on the exposed duet with the flute, or should I spend an hour trying to master those achromatic scales that whiz by at 100 miles an hour covered by the entire string section? Perhaps most importantly, learning how to perform has been crucially important in developing my public speaking ability. As a professor, I give lectures all the time and all over the world. Decades of musical performance have taught me to be comfortable and to ignore mistakes that I make in front of an audience, because I can’t start over or let errors distract me during the remainder of my lecture/performance.