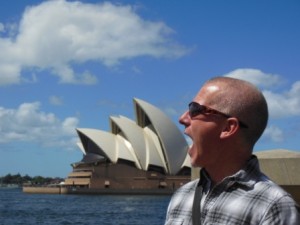 Craig is our flute/piccolo section leader and was a founding board member of QUO.

How did you come to join QUO?
I was one of the founding board members. I had been involved with the community orchestra community for quite some time and was intrigued by the idea of starting an LGBT-identified orchestra or any orchestra for that matter, so I jumped at the chance. There were so many growing pains but I can’t believe where we are today. Proud would be an understatement of how I feel.

What musical symbol best defines you and why?
8va, because I love to play the piccolo. LOL

How long have you been playing your instrument?
I started playing piano and trombone in 4th grade. I quickly became fascinated with woodwind instruments, especially the flute. I started dabbling with it in high school. I actually went to college as a music major on bass trombone, but the flute eventually took over completely and I became obsessed with playing flute in an orchestra. Eventually this started to happen and continues to happen.

Question From Alvaro: What was your longest commute from NYC for a concert or a gig? What is your best memory of it (the playing or the traveling)?
YEARS ago, every summer I played in a summer stock theatre called the Bristol Valley Theatre in Naples, NY in the Finger Lakes region. For those who don’t know, this is NY State’s wine region. There are vineyards and lakes everywhere. After the 6 hour drive to get there, it was total immersion rehearsing 9 hours a day (and performing) surrounded by all this beauty. Nothing else mattered. Loved it.