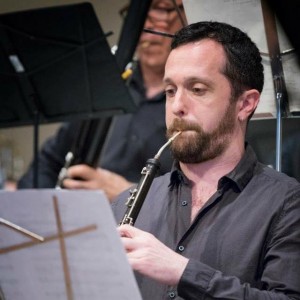 Christian plays oboe and English horn in QUO (and has also played piano and percussion, and sang, and arranged for QUOtets, and I think that’s everything) and is a founding member.

How did you come to join QUO?
I am a founding member of QUO! I’ve played with the Big Apple Corps band since 1998 (!). Rumbling about the need for an LGBT orchestra increased in the mid 2000s, and it finally happened. I joined as an oboist but have enjoyed broadening my contributions to include English horn, piano, percussion, and even voice.

What is your favorite place to take friends visiting NYC? (besides the High Line)
I actually don’t bring visitors to the High Line. As a Queens resident, I tend to promote the peace and cultural uniquenesses of my borough. A walk through Astoria Park, dinner at Agnanti, E Taverna, MP Taverna, or Mojave, drinks at Albatross.

What musical symbol best defines you and why?
Rubato. Life requires a little give and take, which I’m learning more and more as a teacher, musician, friend, and family member.

How long have you been playing your instrument?
I started playing piano by ear at 10 and took 2 or 3 years of lessons starting at 14. At around that same age, I picked up my sister’s flute and taught myself to play. I then got hold of a CD collection my sister received as a gift. Each CD included famous classical works that featured a particular instrument. The oboe collection left a deep impression, particularly the Tchaikovsky “Swan Lake” selections. My high school had no music program at all, so my parents found a summer music enrichment program in our town. I played a bit of flute and oboe in those programs and found that the instructors believed in me to the point that I moved rapidly into more advanced ensembles. Trial by fire! During my sophomore year of high school, while my interest in classical music was firing up, I was bitten by the theatre bug. The end result is that for a while, I was simultaneously taking piano, oboe, and voice lessons. I ended up focusing on voice for my undergraduate and graduate degrees.

Question from Adrienne: Christian, last spring I had the pleasure of performing with you (and lots of other QUO musicians) for a couple of weeks at La Mama in the East Village. For me, it felt like an incredible honor to be playing in a New York City venue that has so much rich history of experimental performing arts in this city. If you could play in any New York City venue, in any decade of time, and with any group or ensemble, what would that be?
Whoa…tough question! That La Mama experience was special, particularly as I used to live in that neighborhood. I suppose I would love to have played or sung under Leonard Bernstein, in any venue! Otherwise, I’d love to perform with a chamber group, or even my fellow singers at St. Bartholomew’s choir, in a space like the Church of St. Luke in the Fields in the West Village. I’m a fan of intimate settings.