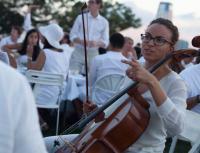 How did you come to join QUO?
About six months after I moved to NYC I finally brought my cello to town. I sat down with Google and starting poring over lists upon lists of orchestras in town and looked through the types of music they each play (classical, contemporary, etc.) as well as where/when they rehearse. QUO checked all my boxes and it was a bonus that it’s LGBTQ-friendly, so it won out.

What is your favorite place to take friends visiting NYC?
So many to choose from but if I had to pick one I would probably say Fat Cat. Who doesn’t want to listen to smooth jazz while playing shuffleboard?

What musical symbol best defines you and why?
The quarter rest. I am very active and am often on the go, but when I reach my destination – or even at points along the way – I am sure to catch a breath and appreciate the short moment of silence/break.

How long have you been playing cello? I’ve been playing cello for 18 years. Originally I played violin; my older brother is a violinist and as an infant I wanted to be my older brother so much that I would take his violin. My parents, for fear that I would break it, crafted a “violin” for me out of a macaroni box, a ruler, a stick, and some string. I did eventually graduate to a real violin but only until I heard a cello and then I was hooked.

Question from Bryan: If you could play one piece on the stage at Carnegie Hall, solo or with an ensemble, what would it be?
Solo: Shostakovich Cello Concerto in E-flat major. Ensemble: Stravinsky’s Firebird. I’m a sucker for a moody Russian.