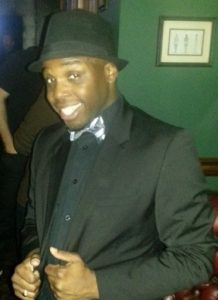 Brian Harrington – First Violin
How did you come to join QUO?
Once upon a time, back in 2008, I was out of work and working Temp jobs. While working an
assignment, I met Ben Solis (who also plays in QUO). We became friends working together and shortly
after I learned Ben was also a musician. I saw Ben was playing in QUO, and I asked him if they needed
any string players. Ben said, absolutely! I came by for a few rehearsals in 2010 but wasn’t able to play
because my schedule wasn’t stable. I finally played my first QUO concert in 2011 and have been around
ever since.
How long have you been playing your instrument(s)?
My musical journey began when I was 12 years old. I started off in a small music school in Brooklyn
playing piano. I auditioned for LaGuardia High School (the Fame High School) and got in for piano. While
at LaGuardia, I was introduced to the violin and have been playing ever since. In total I’ve been playing
instruments for about 24 years. Fun fact, I also picked up viola, flute, clarinet, and bassoon in High
School, College and after College. Violin and viola are the two I play the most, while the others have
been more recreational. Although, I did play clarinet and bassoon in a concert band for about 3 years.
What musical symbol best describes you and why?
I feel like I’m taking one of those online quizzes, but I’d go with the Dal Segno symbol or D.S. for short. It
kind of looks like a sign for Geminis, which is my sign. Dal Segno indicates that you should go back and
repeat the section played from the beginning. If you’ve ever hung out with me, and survived, you’ve
most likely had a great time wanting more (get your minds out of the gutter). If you’ve hung out with me
once, the 2 nd time will be just as good, if not better. In relation to being a Gemini two is always better
than one! Why not listen to something great twice?!
What is your favorite place to take friends visiting NYC?
I have to admit, most of my friends that visit NYC have either lived here or visited before and know the
lay of the land. I don’t have a favorite place to take them, however, we always find a good place to go to
Brunch with a great unlimited food and drinks package. My recent adventure was to Maya on the Upper
East Side. If you haven’t been, I highly suggest going. It was about $49.00 for two hours unlimited food
and drinks. You will definitely leave stuffed and ready for bed.
(From QUO Member Brian Shaw): What has been your favorite musical experience to date?
While I was in college, I auditioned for the Metropolitan Youth Orchestra of New York. I didn’t think I
would get in, but figured I’ve got nothing to lose. Imagine my surprise when I received mail letting me
know I made the cut. To make things even more fantastic, the orchestra would be playing Tchaikovsky
Symphony Nos. 5 at Carnegie Hall under the baton of Lukas Foss! I had heard of Lukas Foss before and
saw some of his performances and was extremely nervous for the first rehearsal. To my surprise, there
were a couple other musicians that I went to High School with playing as well which made me feel at
ease. Lukas Foss was very gentle, with a warm and welcoming personality. He never once raised his
voice at us, but was able to get us to make music, not play notes. The orchestral musician’s level of
professionalism and dedication encouraged me to step up my game and bring the best Brian I could. I
was pleased with myself and the level of music and musicianship I was able to contribute.