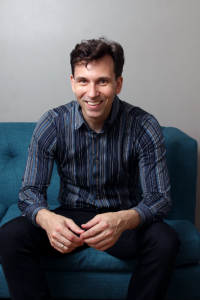 Bjorn is our cello principal and section leader, serves on our board as marketing coordinator, has been a featured composer, and joined QUO in January 2011.

How did you come to join QUO?
After moving from Chicago, where I played in the Lakeside Pride Orchestra, I looked to see if there was a gay orchestra in NY and found QUO. Being new to NY I was looking to connect with our community and make music. QUO has been a great outlet for both.

What is your favorite place to take friends visiting NYC?
I like to take them to Bryant Park and the reading room at the Public Library. These are two of the most beautiful public spaces in the city and a great place to start a tour.

What musical symbol best defines you and why?
The repeat: I tend to get stuck in my habits.

How long have you been playing cello?
I’ve played cello since I was five, probably because my brother played violin. My parents recorded me playing “Twinkle Twinkle Little Star” when I first started on an old reel to reel tape deck where I blurt out ‘How was that?’ right after I played. Apparently I needed positive reinforcement. I have no idea if the tape still exists, but there is a picture of me playing a much too big cello in my pajamas that was taken at the same time.

I also wrote my first composition for cello when I was about seven called “War March” (which sounds like a title a seven year old boy would come up with). I wrote out the score by hand; it included notes below what a cello could actually play, but what did I know? I was seven. When I went to college I was much more focused on composition than cello, but I stuck with the cello because I thought it would make me be a better composer. I’m glad I did.

Question from Liann: If you could go back in time and pick any other instrument to play, what would you pick?
I have always thought I’d make a better pianist than cellist. I have a better sense of harmonic color rather than melodic phrasing. I also wish I could sing. My voice is terrible and I can’t hold a tune. That being said, cello is something that is now part of me and I can’t imagine giving it up.