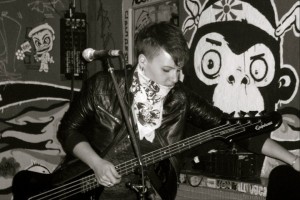 How did you come to join QUO?
I had just returned from teaching out of town for the summer and was catching up with some friends on a rooftop in Manhattan, one of whom is this amazing accompanist and music critic named Eduard Laurel (who writes under the moniker Crack Critic). Eduard had to duck out of the party to accompany somebody for an audition for a QUO section leader spot. Eduard and this musician both returned back to the party after the audition was over, and that’s when I first learned about the orchestra. A few weeks later I played my first concert in the opening of the 2015/2016 season.

What is your favorite place to take friends visiting NYC? (besides the High Line)
Does the High Line Expansion count? Just kidding. I’ve had an apartment and a rehearsal space in Bushwick for seven years, and I’m still really in love with my neighborhood. When friends visit I usually like to grab some cheap food at this amazing taco factory near me called Tortilleria Mexican Los Hermanos then stroll through the more industrial side of Bushwick to Broadway, then under the JZ subway tracks to walk over the Williamsburg Bridge. From the highest point on the bridge there’s an incredible view of North Brooklyn behind you, the bottom of Manhattan in front of you, and you can also see all three of the other bridges connecting them.

What musical symbol best defines you and why?
I’m not sure if this actually “defines” me, but I’ve always loved fully diminished chords. Like A°7. I think it’s something to do with the equally stacked minor thirds (1, ♭3, ♭5, double flat 7) that I find pleasing in a mathematical way (wow, this answer just got real geeky).

How long have you been playing your instrument?
I started playing bass when I got to high school, but I had played piano and a little bit of cello before that. I actually signed up for “beginner band” class when I started high school, with the very 13-year old notion that I could get an “easy A” as a percussion player with my piano/keyboard background. But the string teacher saw on my application that I had cello experience, called me on the phone the summer before I started 9th grade, and he pulled me into the advanced strings program at the school. When he saw what a terrible cellist I was (and maybe also how tall I was) he suggested that I switch over to bass. My first response was “absolutely not” but he talked me into it and from the very beginning it was like I had finally found the instrument that was right for me.

It’s actually a pretty incredible thing this high school music teacher did for me. I went to a public high school in downtown Toronto, and he was able to give me a bass to have at my house to practice on, and also set me up with a scholarship to take lessons with a member of the Toronto Symphony Orchestra. I started high school just at the end of his 30 year career there, so I can’t even imagine the number of kids he had this kind of “life changing” impact on.

Question from Joe: What are your favorite orchestral parts for the bass and what do they add to the sound texture?
I think one of the things I love about bass parts is that they play a huge role in the harmonic outline of music, and also huge role in the rhythmic foundation too. Not to mention as a bass player I get to play in pretty much every type of ensemble and every genre of music (…except for maybe marching band?). But back to Joe’s question, my favorite orchestral work is Bach’s St. Matthew’s Passion. More specifically the second half of that work. I feel like those bass parts, and that music overall is some of the most beautiful music ever written.