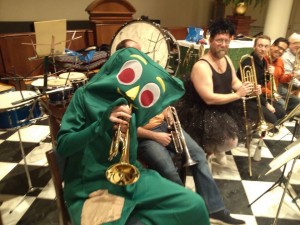 Erin is our trumpet section leader, and joined us in October of 2010

How did you come to join QUO?
I joined in 2010 midway through the season because my husband, a trumpetor, found an ad from QUO on Craigslist. We had just moved to New York and I was looking for a way to continue playing. I had never played in an orchestra before but the music repertoire looked solid and I was excited for a new project. Jim Babcock got me all set up and I joined for my first rehearsal night. Everybody was so nice and welcoming. It was a nice mix of badass musicians and amateur music lovers like me. It was a perfect fit.

Throughout the years, I’ve formed many friendships within QUO. I love sharing the music we make with other friends and family. QUO became more than just “what I do on Wednesday nights and occasional weekends.” For example, QUO members, some who I hardly knew, reached out and helped me through a very rough time in the aftermath of Hurricane Sandy. I will never forget those acts of kindness.

QUO has given me an outlet to express myself, a compassionate network of friends, and it has introduced me to a community of which I am proud to be a part. I am so glad my husband saw that Craigslist ad!

What’s your favorite place to take friends visiting NYC?
That’s tough. It depends on the friend. There’s something for everyone in NYC. For a drink: The Brandy Library in TriBeCa. For all-you-can-eat sushi: Yuka sushi E 80th. For nature: The Brooklyn Botanical Gardens. For view: My “backyard” at the park in Hunters Point, where you can stand at the East river and see the entire city skyline, often with a beautiful sunset in the background.

What musical symbol best defines you and why?
Tacet

Question from Matthew: If you could magically be able to play another instrument as expertly as you play trumpet, what would it be and why?
Pipe organ. I love sacred choral music. I want to rattle some rib cages with some good vibrations.